Thomas Hardy was born on the morning of 2nd June 1840 in the isolated thatched cottage, built by his great-grandfather at Higher Bockhampton, a hamlet on the edge of Piddletown Heath, three miles east of the county town of Dorchester. Both his maternal grandmother Betty and his mother, Jemima, were notable and purposeful women with vigorous and lively minds, and from them Hardy drew his keen sensitivity and his tenacious intellectual curiosity. But in depth of character and especially in his quiet, unassuming determination, he seems more to have resembled his father, also Thomas Hardy, a builder by trade, who had inherited a genius and passion for music. His talents were passed down to the younger Thomas who from an early age was playing the folk fiddle at local ‘randys’, and who throughout his life could be moved to tears by certain pieces of music. The personalities of his parents, the close-knit life of the small rural community, and the often harsh environment of the surrounding heath and woodland formed a deep and lasting impression on Hardy, ‘the man who used to notice such things’, and became the foundation blocks of his fiction and poetry.

After initial schooling in Lower Bockhampton, Hardy was transferred at the age of ten by his ambitious mother to Isaac Last’s non-conformist school in Greyhound Yard, Dorchester -a three-mile walk from the isolated family cottage at Bockhampton. At sixteen, his formal education completed, he was apprenticed to John Hicks, a local architect – continuing to make the daily journey into the county town by foot – as Florence records in Hardy’s ghosted autobiography The Life:

Owing to the accident of his being an architect’s pupil in a county-town of assizes and alderman, which had advanced to railways and telegraphs and daily London papers; yet not living there but walking in every day from a world of shepherds and ploughmen in a hamlet three miles off, where modern improvements were still regarded as wonders, he saw rustic and borough doings in a juxtaposition peculiarly close.

In April 1862 Hardy travelled to London with a precautionary return ticket in his pocket, but readily found employment as a ‘gothic draughtsman who could restore and design churches and rectory houses’. He was to remain in London for five years, during which time he made use of all the facilities which the metropolis had to offer: visiting art galleries, attending lectures and concerts and public dances. He also here found romance with Eliza Nicholls, a girl from Kimmeridge, in service in the Paddington area which was something of a West-Country enclave. In London Hardy wrote poetry when not at work, though with no prospect of publication. In 1867 ill-health caused by the proximity of his offices to the Thames which was then no more than ‘a tidal sewer’ forced his return to Dorset, where he found employment once more with Hicks, and then with G. R. Crickmay, a Weymouth architect. For purely practical reasons he now turned his hand to prose fiction, though his first completed novel, The Poor Man and the Lady, proved to be too radical for publication. But in 1870, on the advice of George Meredith acting as a reader for the publisher Macmillan, he produced a sensation novel entitled Desperate Remedies, published by William Tinsley in 1871.

In March 1870, Hardy had reluctantly travelled on Crickmay’s instructions to North Cornwall to restore the dilapidated church in the isolated parish of St Juliot. Here he fell in love with the Emma Lavinia Gifford, sister-in-law of St. Juliot's rector, in a courtship which he rapidly fictionalised in his third novel A Pair of Blue Eyes. Meanwhile Leslie Stephen, editor of the Cornhill, was much attracted by Hardy’s second novel Under the Greenwood Tree, based upon the Hardy family experiences in the Stinsford Quire. Stephen commissioned Far from the Madding Crowd which, with quite strong editorial intervention, became a best seller, allowing Hardy to abandon architecture, marry Emma Gifford, and become a full-time writer. However once united in matrimony – as so often the case in Hardy’s fiction – the couple, who remained childless, became increasingly estranged and unhappy with each other. Hardy gradually excluded Emma from his professional life, and as his reputation as a novelist became more secure he sought solace elsewhere. Again as might be predicted from his fiction, Emma’s sudden and unexpected death in 1912 at the age of 72 precipitated an intense outpouring of lyrical poetry – Hardy loving the woman dead and buried as he had never loved her in life. 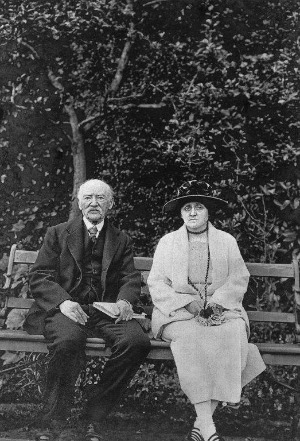 Once married Hardy more than fulfilled his professed ambition ‘to be a good hand at a serial’, publishing a further ten novels over the next twenty years plus, in due course, over fifty short stories. Public and critical reception of his fiction – then as now – was chequered with The Hand of Ethelberta (1876), The Trumpet-Major (1880), A Laodicean (1881), Two on a Tower (1882) and The Well-Beloved (1897) being generally regarded as more minor works; whilst the significantly autobiographical The Return of the Native (1878) is grouped with the major works of his maturity – The Mayor of Casterbridge (1886), The Woodlanders (1887), Tess of the d’Urbervilles (1891) and Jude the Obscure (1895). The latter three books which dealt with marriage, divorce and the hypocrisy of late Victorian attitudes towards women were described by Hardy as novels ‘addressed by a man to men and women of full age’. The subsequent outcry from the indignant and righteous which led to Jude being banned by circulating libraries and burnt  by the Bishop of Wakefield was good for sales - for Hardy was nothing if not a shrewd businessman - and allowed him the luxury of abandoning fiction to concentrate on his first love, poetry. Thus the Victorian novelist became a twentieth-century poet, publishing eight volumes of verse containing more than nine-hundred poems over a thirty year period, commencing with Wessex Poems in 1898.

For the first decade of their marriage the Hardys had led something of a nomadic existence moving from one rented property to another, mainly in Dorset but usually at a safe distance from the thatched cottage beside the Heath where Thomas's parents were still living. Jemima, his forthright mother, disapproved of marriage, and he was the only one of her four children to disobey the maternal injunction to say single and live together as bachelor siblings. In 1885 the Hardys moved into Max Gate, the brick villa which Hardy had built on land purchased from the Duchy of Cornwall in an isolated spot beside Conquer Barrow to the south-west of Dorchester. Here he lived for the remaining forty-two years of his life, apart from his regular sojourns in Town for the London Season, gradually extending the house which slowly became enclosed by his extensive plantings of Beech and Austrian Pine.

Wessex Poems contained poetry written from Hardy’s time in London onwards, including the poetry generated by the break-up of his relationship with Eliza Nicholls. Poems of Past and Present (1902) was, as the title implies, a mixture of old and new verse – of particular note is a section entitled ‘War Poems’, generated by Hardy’s deep distress at the horrors of the Boer War. These poems were to prove strongly influencial on the next generation of poets – the young men sent to the trenches of the Great War. For most of the first decade of the twentieth-century Hardy was engaged on what he regarded as his magnum opus – The Dynasts – an epic verse drama of the Napoleonic wars. Neither critics nor the general public have yet to share his enthusiasm for this immense work, with some readers troubled by the paradox of a man who abhorred war and spoke out publicly against cruelty to any living creature spending so much energy and enthusiasm on writing in detail about a military campaign. Hardy, however, stressed that as a true poet his works should be regarded as no more than ‘a series of seemings’ and that, at his most consistent, he could offer no more than a ‘tentative philosophy’ of life. The horrors of the Great War were to dent his belief in a ‘pessimistic meliorism’ based upon ‘loving-kindness’, but he proved himself a survivor, visiting German prisoners-of-war in their compound at Poundbury and continuing to campaign against cruelty to animals, the innocent victims of man’s inhumanity to man.

Three months after Emma’s death Hardy revisited St Juliot on the 43rd anniversary of his original journey to that ‘wild weird western shore’. During his intense bereavement he revisited their courtship in his ‘Poems of 1912-3 : Veteris vestigia flammae’, arguably the most powerful love lyrics in the English language, and a simple pointer for the uninitiated as to why Hardy the poet is likely to outlast Hardy the novelist in terms of popular longevity. Fourteen months after Emma’s death Hardy married Florence Dugdale, nearly forty-years his junior, a failed school teacher (due to ill-health) with a depressive temperament, which rather suited Hardy’s innate cyclothymic gloom. He had known and ‘employed’ her for a decade or so as his researcher/secretary, and she had in 1911 enjoyed a summer holiday with Emma in Worthing whilst Hardy remained at Max Gate. 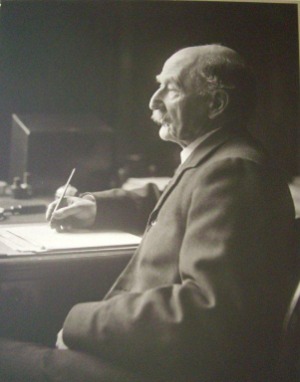 The Great War concluded, Hardy, who had received the Order of Merit in 1910 (having refused a knighthood which would have rendered Emma ‘Lady Hardy’), became the Grand Old Man of English Letters, visited at Max Gate in 1923 by Edward Prince of Wales, and befriended by the neo-Georgian literati. Siegfried Sassoon, Robert Graves and Virginia Woolf all made their way to Dorchester, and T.E. Lawrence, based at Bovington Camp, was a regular visitor. Hardy took all this in his stride, continuing to pursue a regular daily writing routine in the solitary confinement of his study until the last days of his life, the output of which was a further six volumes of poetry. Academic honours arrived in rapid succession - honorary doctorates from the universities of Aberdeen, Cambridge, and Oxford, and honorary fellowships from Magdalene College, Cambridge, and Queen’s College, Oxford. Hardy died at Max Gate on the evening of 11th January 1928. His long-held wish was to be buried with Emma amongst the family graves at Stinsford. However, in an unholy compromise worthy of his fiction – Florence being too weak to resist the other executors – his heart was cut from his body and buried at Stinsford whilst his mutilated remains were cremated at Woking, the ashes interred in Poets’ Corner at Westminster Abbey beside the grave of Charles Dickens.

A Walk to Rainbarrow and Mistover Knap, Where Tess and Eustacia Overlap
Latest news

We use cookies to personalise content and ads, to provide social media features and to analyse our traffic. We also share information about your use of our site with our social media, advertising and analytics partners who may combine it with other information that youĺve provided to them or that theyĺve collected from your use of their services. You consent to our cookies if you continue to use our website.

The Thomas Hardy Society is an educational charity supported solely by volunteers. The Society is based in Dorchester where the Council of Management meets six times a year. Details of the Annual General Meeting, to which anyone is welcome, are sent through the Societyĺs usual channels in good time. News and upcoming events are promoted in e-newsletters and journals and on social media such as Facebook and Twitter in addition to this website. For further details please contact us.